ARCS Illinois IIT scholar, Katherine Asztalos, attended the 2017 C3E Women in Clean Energy Symposium at MIT to participate in the poster session. She presented part of her work entitled "Unsteady Aerodynamic Theory in BEM Model of VAWT". This work focuses on the implementation of a linear unsteady aerodynamic model based on Theodorsen's theory into a blade element momentum (BEM) model. These models typically rely upon steady-state aerodynamic force data obtained from experimental airfoil tests. The results were compared to potential flow codes and a finite volume simulation (FVM), the former of which included a dynamic stall model based on Beddoes-Leishman's model. The capture of similar phenomena in the same azimuthal position at the end of the windward cycle in both the results obtained using my BEM model with Theodorsen's method and the FVM simulation warrant further investigation into the use of linear unsteady theory in time-averaged models.

The advantages to using vertical-axis wind turbines, or VAWTs, over horizontal-axis wind turbines lie in their ability to operate no matter the wind direction, as well as their lower noise pollution attributed to lower rotational speeds, and lower center of gravity as compared to HAWTs.

Katherine's research is focused on developing a computational model of a VAWT such that the physics governing the unsteady aerodynamics inherent to these machines is modeled accurately. To achieve this, she has implemented a linear unsteady aerodynamic model based on Theodorsen’s theory within her computational model, which derives from the conservative laws of mass, momentum, and energy. Katherine is further pursuing this work by setting up an experiment with the unsteady subsonic wind tunnel at IIT in order to further test her implementation of this theory into her computational model. The long-term goal of this research is to understand the physics governing unsteady aerodynamic phenomena in the interest of developing a control system to operate VAWTs such that their power output is competitive with the larger horizontal-axis wind turbines. 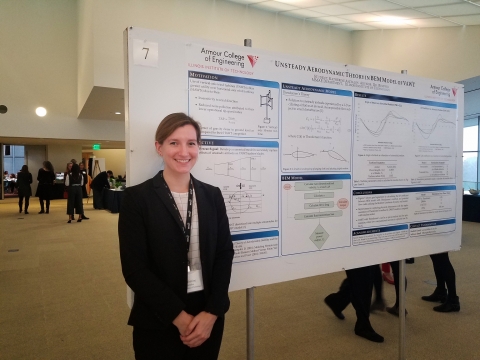